How the rise of supermarkets left out black America 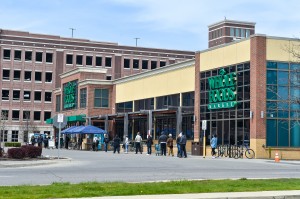 Major Cities In The U.S. Adjust To Restrictive Coronavirus Measures 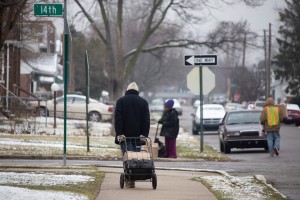 Joe Thomas, 62, of Detroit, takes what groceries he could get as Focus Hope volunteers distribute groceries on March 23, 2020, 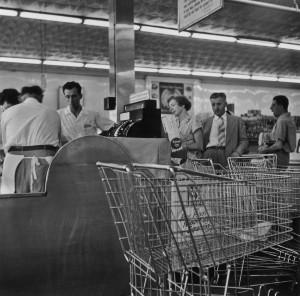 (CNN) — If you’re like most Americans, you probably think of going to the supermarket and stocking up on groceries as a normal thing, and you take it for granted.

But 60-plus years of corporate strategies, white flight and stereotypes about black Americans have made it significantly harder for many black people to access a supermarket than it is for most white people, according to leaders of big cities across the country as well as food policy advocates, historians and urban studies experts.

The consequence is that for people living in many urban, black neighborhoods, groceries are harder to access and often more expensive. Healthy food is also harder to come by.

“National and regional supermarkets are typically full-service, with an extensive variety and assortment of food at competitive prices. Some even have pharmacies or minute clinics,” said Anne Palmer, director of the Food Communities & Public Health program at the Johns Hopkins Center for a Livable Future. “By bypassing black or low-income communities, they exacerbated the problem of easy access to healthy food.”

On average, in the 50 largest US metro areas, roughly 17.7% of predominately black neighborhoods had limited access to supermarkets, compared to 7.6% of largely white neighborhoods, according to an analysis conducted for CNN Business by the Reinvestment Fund, a nonprofit community development organization. The racial disparities persisted across income lines, according to the analysis, which used a combination of 2016 supermarket location and 2016 Census data.

Research from the Johns Hopkins School of Nursing has also found that predominantly black neighborhoods have less access to grocery stores: “At equal levels of poverty, black census tracts had the fewest supermarkets [and] white tracts had the most,” Hopkins researchers found in their 2014 analysis of census and food retailer data.

Supermarkets expanded their presence mainly in the suburbs in the second half of the twentieth century as a result of white flight. In the 1980s, top grocery chains merged and the industry consolidated. That resulted in fewer store locations in cities as the surviving chains closed overlapping locations. Even today, supermarket chains have been reluctant to expand in minority neighborhoods. Some local leaders claim that’s in part because of stereotypes of black communities as poor and crime-ridden.

Supermarket chains “have a demographic location profile that prioritizes communities that are not low income and not African American,” said Stacy Mitchell, co-director of the Institute for Local Self-Reliance, an organization that opposes concentrated economic power in communities. “The outcome has a racial bias.”

In a statement, Heather Garlich, spokesperson for FMI, a trade group for the food retail industry, said: “Market, economic and demographic factors influence a company’s decision to establish a store. Grocery stores require an adequate customer base and economic support to remain viable; real estate costs and availability are significant factors to determine where and how a store is built.”

Supermarkets work closely with community leaders, elected officials and other groups to help bring stores to neighborhoods, she said.

But some critics say supermarkets have intentionally avoided black neighborhoods.

“We saw supermarket redlining in black neighborhoods,” where chain supermarkets either closed down, relocated to suburban areas or chose not to open in neighborhoods with high black populations, said Debarchana Ghosh, assistant professor in the University of Connecticut’s department of geography.

Michael Nutter, the former mayor of Philadelphia from 2008 to 2016, said as a member of the city council he spent years trying to bring a grocery store to a largely black area of Philadelphia by offering tax incentives. (ShopRite eventually agreed to come in 2007.)

The rise of suburban supermarkets

As mostly white residents left cities for the suburbs during the back half of the twentieth century — spurred by racial unrest across cities in the 1960s — self-service supermarkets and big-box chains saw an opportunity.

Grocery store profit margins are razor thin, normally in the range of 1% to 2%. Companies saw the opportunity for greater profits in the largely white suburbs, said Joshua Davis, a historian at the University of Baltimore and author of “From Head Shops to Whole Foods: The Rise and Fall of Activist Entrepreneurs.”

Supermarket chains relocated or built new, larger stores, with wider aisles to stock more food on shelves than they previously had, on cheap, undeveloped suburban land with big parking lots.

“Supermarkets became the most common source for grocery shopping during a time of rapid suburbanization, and their car-dependent large footprint format is designed for suburban sprawl,” said Jerry Shannon, an assistant professor in the University of Georgia’s department of geography. “Supermarkets were created with suburban residents in mind.”

That led to a racial divide in where supermarket chains put new store locations.

“Supermarkets were overwhelmingly focused on a white, suburban, middle-class family of four,” said Davis. “They didn’t see black and brown customers as being profitable.”

In 1993, Business Enterprise Trust, a nonprofit group, characterized the retail industry’s attitude, saying, “it makes no sense to serve distressed areas when profits in the serene suburbs come so easily.”

As the suburbs exploded, another shift was taking place in the grocery industry. A spree of mergers and buyouts in the 1980s led to “fewer, larger supermarkets owned by large chains,” according to a 1991 report by the University of Connecticut. Fifteen of the top 20 national chains merged or underwent a buyout.

These grocers shuttered stores located close together as they bought each other out, hollowing out cities.

The US Conference of Mayors, a group representing cities with a population of 30,000 or larger, described grocery closures in major cities that year as “the [supermarket] redlining of urban America.”

Detroit, a city of around 700,000 residents, 78% of whom are black, is a case study for how the trend of supermarket chains pulling out of black areas in cities and focusing on middle-class suburbs is playing out.

There are just three major supermarkets in the city — Two regional chain Meijer stores and a Whole Foods. For seven years in the mid-2000s, Detroit didn’t even have a large grocery chain, in part the result of a long history of white flight from the city and underinvestment.

A Meijer spokesperson said a new small store — around one-fifth the size of Meijer’s two superstores in the city — is scheduled to open in downtown Detroit next year. “We are also currently looking at additional sites for more small format stores in the city,” he said.

A spokesperson for Whole Foods pointed to its “Whole Cities Foundation,” which has partnered with more than 150 nonprofits in the United States, contributing more than $1.2 million to local communities.

Still, around 30,000 people in Detroit don’t have access to a full-scale grocer, according to a 2017 Detroit Food Policy Council report, and there are no black-owned grocery stores in the city. The majority of the city is served by around 70 independent grocery stores, said Alex Hill, director of the Detroit Food Map Initiative and an adjunct professor in Wayne State University’s Center for Urban Studies.

“Locally, we’ve seen grocer flight,” he said. “You can find Kroger stores in a ring around the city, but none inside the border of Detroit.” Kroger declined to comment.

City leaders and local food policy experts say negative stereotypes of black communities as poor and crime-ridden, and perceived challenges to hire qualified workers, have contributed to supermarkets’ decisions to avoid the city.

“Big chains don’t see Detroit as a place where they can make money,” said Winona Bynum, executive director of the Detroit Food Policy Council. “The perception is that Detroit is a big pit of poverty and black people will steal you blind and try to get things for a nickel.”

Garlich, of the grocery trade group FMI, said in a statement that recently, its members have been “conducting listening tours within their own companies and working with local business groups to address bias, reject discrimination and assess how they can better meet the needs of the neighborhoods they serve.”

Subway wants to win customers back with an updated menu. Don't worry, the tuna will stay the same

How long can supply shortages continue?

Didi shares crash 22% after China bans it from app stores

How the rise of supermarkets left out black America