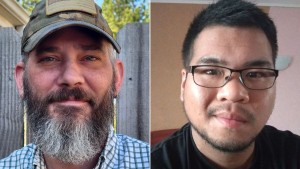 Family members of Americans Alexander John-Robert Drueke (left) from Tuscaloosa, Alabama, and Andy Tai Ngoc Huynh from Hartselle, Alabama confirmed they had been freed. They were captured while fighting for Ukraine north of Kharkiv in June.