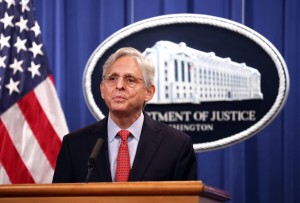 Garland issued a memo that cites dozens of cases referred by the Federal Aviation Administration to the FBI for investigations of violent air travel incidents. The referrals are the result of an information-sharing system in place between the agencies.

The memo also instructs prosecutors to coordinate with state, local and tribal law enforcement agencies within the next 20 days to ensure incidents are referred to the FBI and US attorneys for possible federal prosecution.

The move comes as the US enters the peak holiday travel season, which is expected to be the busiest since the coronavirus pandemic began. Major US airlines are operating with fewer pilots and flight attendants than they were before the pandemic, and with domestic airline bookings nearly back to normal, airlines are trying to do more with less this holiday season.

“Passengers who assault, intimidate or threaten violence against flight crews and flight attendants do more than harm those employees; they prevent the performance of critical duties that help ensure safe air travel,” Garland said in a Justice Department statement.

The FAA has received 5,338 reports of unruly passengers, about three-quarters involving the federal transportation mask mandate, and has opened more than 1,000 investigations.

Overall the number of domestic flights planned from last weekend to just after New Year’s Day is down 12% compared with the same period in 2019, according to data from Cirium, an airline data tracking service.