Biden to have audience with Pope Francis during trip to Rome 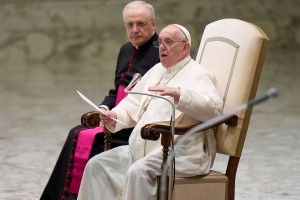 Biden to have audience with Pope Francis during trip to Rome

President Joe Biden and first lady Jill Biden will meet with Pope Francis during their trip to Rome later this month for the G20 conference, White House press secretary Jen Psaki said in a statement.

“They will discuss working together on efforts grounded in respect for fundamental human dignity, including ending the COVID-19 pandemic, tackling the climate crisis, and caring for the poor,” Psaki said in a statement.

Biden, a lifelong devout Catholic who attends weekly Mass meeting, will meet the Pope in Vatican City on October 29, Psaki said. The G20 Leaders’ Summit is taking place from October 30 to October 31 in Rome.

The meeting will come amid a debate within the US Catholic Church over granting communion to Catholic politicians who support abortion rights, including the nation’s second Catholic President. Biden had been denied the sacrament once in 2019 in the run-up to the election and the issue drew new attention in June when the United States Conference of Catholic Bishops proceeded with a plan that could deny communion to such public figures, setting up a potential public rebuke of the President.

The Pope said last month that bishops debating whether to deny communion to public figures who support abortion rights should make their decisions from a “pastoral” viewpoint and not a political one.

“The problem is not theological, it’s pastoral,” Francis told reporters. “How we bishops deal with this principle. We must be pastors, also with those who are excommunicated. Like God with passion and tenderness. The Bible says so.”

Biden has said he is personally opposed to abortion but does not believe he should impose his views on the rest of society.

The President often wears his late son Beau’s rosary on his wrist and frequently speaks about the important role that his faith plays in his life, particularly in carrying him through grief.

Biden’s first wife and infant daughter were killed in 1972 in a car crash right after he had won his US Senate seat. Beau Biden, an Iraq War veteran who served as the attorney general of Delaware, died in 2015 from brain cancer at the age of 46.

Biden’s faith was woven into his messaging during the 2020 presidential campaign. His speeches, particularly during the campaign, often included quotes from Scripture and Catholic hymns, as well as references to the nuns and priests from whom he learned in school.

During the 2020 Democratic primary, Biden dropped his long-held support for the measure that blocks federal funds from being used for most abortions, called the Hyde Amendment. Biden said at the time that he changed his mind because Republican state lawmakers had enacted laws making access to abortions more difficult for women who cannot afford the procedure or travel to obtain it.

More recently, Biden said last month that a Texas state law that bans abortion after as early as six weeks into pregnancy is “almost un-American,” and called it an “unprecedented assault on a woman’s constitutional rights” as guaranteed by Roe v. Wade, the landmark 1973 Supreme Court decision that affirmed the legality of a woman’s right to have an abortion.

This story has been updated with additional background information.

Tapper to Pelosi: Are you frustrated with Sinema and Manchin?