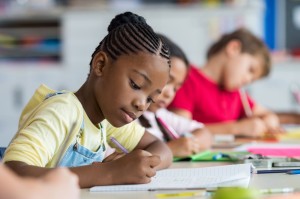 When Danielle Atkinson’s daughter brought home a second-grade assignment that highlighted Christopher Columbus’s explorations, Atkinson said she began to notice inequities in the curriculum being taught in the school district.

There were plenty of lessons about Columbus and other historic White figures, but the contributions of Black Americans were largely missing in the coursework at Royal Oak Public Schools in Michigan, she said.

Atkinson and other Black and brown parents felt the students weren’t learning enough about the civil rights movement, the Harlem Renaissance, the desegregation of schools and the importance of Black History Month so they formed the Royal Oak Multicultural Parents Association in 2016. They demanded more culturally diverse curriculum from the district, but Atkinson said she’s seen little progress.

“Our children are not having the education around race and history that they should, and it’s to our detriment and it’s a disservice to our children,” said the mother of six, who is also founder of the Michigan-based Mothering Justice, a group that advocates for Black and brown moms.

Now Atkinson feels like their calls for inclusion are being drowned out by a strong force of conservative, mostly White suburban mothers who have made national headlines for their efforts to ban critical race theory from schools.

The largely White group of parents, many of whom have protested and spoken out at riotous school board meetings, helped ignite a national debate about whether anti-Black racism should be taught in America’s public schools. The concept has become a social and political lightening rod with several states banning critical race theory this year and Republicans pledging to make it core to their midterm election strategy. Educators insist that critical race theory — which acknowledges that racism is both systemic and institutional in American society — is generally not included in grade school curriculum. The concept is usually taught in law school or graduate school.

Many Black parents, meanwhile, don’t see their voices reflected in the national conversation.

They too have shown up at school board meetings, formed parent groups to lobby for Black history curriculum, and rallied against the racism their children experience in the classroom. And they are determined to be heard.

“Most of our parents left traditionally Black communities (for majority White schools)… for us to have a better education,” Atkinson said. “We shouldn’t also have to lose our voice and our children’s cultural education because of it.”

Reckoning with a racist past

Some Black parents believe teaching the history of anti-Black racism would help children understand the harm behind it and where it originated.

Monica Hutchinson said her child was in second grade at a school in southwest Virginia when a White classmate called them the n-word about 10 years ago.

Hutchinson said she was frustrated that a White teacher did not respond in a way that spoke to the gravity of the racial slur or offered enough historical context to the students about why the word should not be used.

“I don’t know a Black parent that doesn’t have stories that they can share,” she said. “Just about every Black parent has got them.”

Hutchinson argues the grievances about White parents with critical race theory are often elevated at the expense of all other concerns.

In Henrico County, Virginia, where Hutchinson’s two younger children now attend public schools, a White mother at a school board meeting last month spoke out against the book “Out of Darkness,” a 2015 historical young adult novel by Ashley Hope Pérez that depicts a relationship between Mexican American and Black teens. The book explores sex, sexual abuse and racism — and has been denounced by conservatives as “pornography.” At the request of a school division administrator, the book has now been temporarily removed from high school libraries across the county while a committee reviews the book.

“This is a way for them to stop, or try to prevent the schools from actually teaching, and practicing, equity, diversity and inclusion across the schools,” Hutchsinon said. “I hear a lot of White mothers say they think their child is too young to learn about racism. You know what, my child’s not too young to experience it.”

In the final days of the race against Democrat Terry McAuliffe, Youngkin featured White conservative activist and mother Laura Murphy lamenting the content of the Toni Morrison Pulitzer Prize-winning novel Beloved, though Murphy did not specifically name the book in the ad. “Beloved” is considered a seminal work of American fiction and centers on the story of Sethe, a former slave and a mother who kills her child to spare her from slavery.

Earlier this year, Geiss said she voted against the bill proposed to a Senate committee by Republican Michigan Sen. Lana Theis to ban critical race theory from schools. While the bill was approved by the committee, it is awaiting a full Senate vote, Geiss said.

Geiss said conservatives have created a “boogeyman” around teaching critical race theory as if they refuse to acknowledge the country’s past sins. The enslavement of Black people, Geiss said, had a systemic impact on race relations that fueled redlining, the Black maternal health crisis and many other inequities. Children need to learn this so they don’t repeat the wrongdoings of American history, she said.

“We (Black parents) are the ones who when a child calls our kid a slave we have to pick up those pieces and wipe those tears,” Geiss said. “When (teaching race) is framed as only an issue that White parents have, they are missing an entire fragment of the population.”

Some experts and activists say placing the spotlight on White suburban moms and critical race theory could potentially weaken other movements traditionally led by Black mothers.

Jennifer R. Farmer, a prominent publicist who authored a self-help book “First & Only” for Black professional women this year, said if she were advising Democrats on counter messaging on critical race theory, she would tell them to “get resources to grassroots groups who are already working on education and equity.”

For example, Farmer said there have been organizations such as the Advancement Project led by Black mothers to address the school to prison pipeline, which is the link between the disproportionate number of Black minors who receive harsh punishment in schools like suspensions and expulsions who ultimately end up incarcerated.

“You can’t have progress on these issues without talking about race,” Farmer said.

Judith Browne Dianis, executive director of the Advancement Project, said Black women and Black educators have always fought for racial justice for youth as well as more inclusive curriculum. But the movement of mostly White moms against critical race theory has become more politicized, particularly leading into the 2022 midterms.

“We know that a school culture that is inclusive is important in ensuring that young people are in an environment that is nurturing and where they are not subject to the school to prison pipeline,” Dianis said. “And so there’s like these connections to what could become of our school when these conversations about race and racism and Black history, if they get erased from the school building?”

RAW: BIDEN REMARKS ON 1 YEAR IN OFFICE (WALK UP)