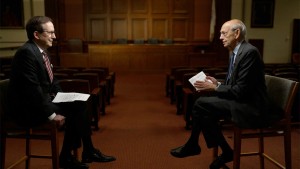 In a wide-ranging interview with CNN’s Chris Wallace (left) on “Who’s Talking to Chris Wallace,” Justice Stephen Breyer spoke about the ongoing controversy regarding Ginni Thomas, the wife of Justice Clarence Thomas.