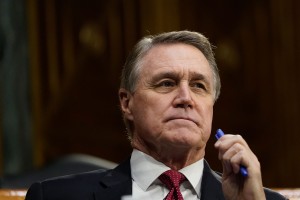 Former US Sen. David Perdue officially announced his run for governor of Georgia on Monday, launching a primary challenge to sitting Republican Gov. Brian Kemp in a state that has been trending away from the GOP for years.

“I’m running for governor to make sure Stacey Abrams is never governor of Georgia,” Perdue said in a video posted on his campaign website.

Abrams, the 2018 Democratic nominee whom Kemp narrowly defeated, announced last week she would run for governor again and is considered the favorite in her party.

Perdue’s entry comes after weeks of speculation that the Republican, who lost his bid for reelection to the Senate in a runoff earlier this year to Democrat Jon Ossoff, was considering challenging Kemp.

“David Perdue will eliminate the Income Tax, secure the Elections, defend the Second Amendment, support our great Farmers, get crime in Atlanta and other places under control, take care of our great Vets, and put parents back in charge of the schools,” Trump said in a statement.

Perdue said later Monday that he was “honored to have President Trump’s support in this race.”

Trump has publicly denounced Kemp for months for not challenging the results of the 2020 presidential election — which Trump lost to Democrat Joe Biden — and has been seeking a credible primary challenger to support.

Trump has also directed his anger at Georgia’s Republican secretary of state, Brad Raffensperger, for similar reasons. In his launch video, Perdue mentioned both Kemp and Raffensperger as sources of division within the Republican Party in Georgia — blaming them for the Democratic statewide gains in the 2020 cycle.

“To fight back, we simply have to be united. Unfortunately, today, we are divided, and Brian Kemp and Brad Raffensperger are to blame,” said Perdue. “Look, I like Brian, this isn’t personal. It’s simple. He has failed all of us and cannot win in November. Instead of protecting our elections, he caved to Abrams and cost us two Senate seats, the Senate majority, and gave Joe Biden free rein.”

The Kemp campaign released a statement on Sunday, when news of Perdue’s plans first broke, calling Perdue “the man who lost Republicans the United States Senate.”

“Perdue’s only reason for running is to soothe his own bruised ego, because his campaign for U.S. Senate failed to inspire voters at the ballot box — twice,” Kemp spokesman Cody Hall said.

“There’s no difference between Kemp and Perdue,” Bannon said, charging that Perdue was a “classic country club” type of Republican that Bannon has long railed against.

Democrats, meanwhile, are celebrating the infighting within the Georgia GOP.

“Republicans like Brian Kemp and David Perdue have failed Georgians at every level of leadership, and voters can clearly see that the GOP has no real ideas to help working families or move Georgia forward — just conspiracy theories and divisiveness,” said Scott Hogan, the executive director of the Democratic Party of Georgia. “No matter who emerges from Republicans’ messy, race-to-the-right gubernatorial primary, voters know that Democrats are the only ones who will deliver on the issues Georgians care about, like recovering from COVID-19 and expanding access to health care.”

Republicans have long dominated statewide elections in Georgia, including holding the governor’s mansion for five straight elections. Abrams came the closest to breaking that trend in 2018, when she lost to Kemp by just under 55,000 votes. Her performance presaged Democrats’ victories in the state two years later in the presidential and Senate races.

Democratic fortunes have improved thanks to a combination of higher Black voter turnout as well as a shift in the Atlanta suburbs away from the GOP. Republicans have stayed afloat in recent years thanks to the party running up its own numbers among rural White voters.

Kemp will also have some financial support from the Republican Governors Association, which has said it will support GOP incumbents who face primary challenges.

“We intend to protect our incumbents and keep our red states red,” said Gov. Doug Ducey of Arizona, who is the co-chairman of the RGA.

This story has been updated with a statement Monday from former President Donald Trump and Perdue’s response.

A GOP senator attacked CNN instead of answering questions. Here's why