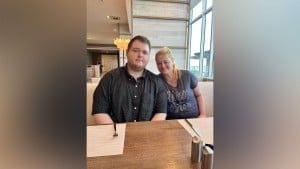 Anderson Lee Aldrich and his mother Laura Voepel in July. The suspect in the mass shooting at an LGBTQ nightclub in Colorado had a tumultuous upbringing in which he was bullied as a teenager and raised for a time by his grandmother.