Dwayne Johnson meant what he said about Vin Diesel 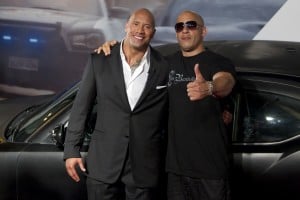 Dwayne Johnson meant what he said about Vin Diesel

Vin Diesel may have viewed his highly publicized feud with Dwayne “The Rock” Johnson as a bit of “tough love,” but Johnson is not backing down from what he said about Diesel.

In a new cover story for Vanity Fair, Johnson talked about the role he played in the conflict.

In 2016, he posted a photo on his verified Instagram account — which he has since removed — in which he talked about filming “The Fate of the Furious.

“Some (male co-stars) conduct themselves as stand up men and true professionals, while others don’t,” Johnson wrote at the time, leading to speculation he was talking about Diesel.

“It caused a firestorm. Yet interestingly enough…[it was] as if every single crew member found their way to me and either quietly thanked me or sent me a note,” Johnson told Vanity Fair. “But, yeah, it wasn’t my best day, sharing that. I shouldn’t have shared that. Because at the end of the day, that goes against my DNA.”

Diesel talked to Men’s Health about the beef earlier this year. He said that as a producer for the “Fast & Furious” franchise, he felt he had to take a hard stance with Johnson, who played Luke Hobbs.

“It was a tough character to embody, the Hobbs character,” Diesel told Men’s Health. “My approach at the time was a lot of tough love to assist in getting that performance where it needed to be. As a producer to say, ‘Okay, we’re going to take Dwayne Johnson, who’s associated with wrestling, and we’re going to force this cinematic world, audience members, to regard his character as someone that they don’t know’ — Hobbs hits you like a ton of bricks.”

Johnson pushed back on that in his interview with Vanity Fair, saying, “I’ve been around the block a lot of times. Unlike him, I did not come from the world of theater.”

“And, you know, I came up differently and was raised differently. And I came from a completely different culture and environment,” he said. “And I go into every project giving it my all. And if I feel that there’s some things that need to be squared away and handled and taken care of, then I do it. And it’s just that simple.”

“So when I read that, just like everybody else, I laughed,” Johnson said. “I laughed hard. We all laughed. And somewhere I’m sure Fellini is laughing too.”

CNN has reached out to reps for Diesel for comment.

RAW: NICOLE KIDMAN IS LUCILLE BALL IN 'BEING THE RICARDOS'