Free community college is out of Biden’s plan, but a bigger Pell grant could still help cut costs

President Joe Biden’s plan to make tuition free at community colleges is unlikely to make it into the final bill to expand the nation’s social safety net. But boosting the federal Pell grant is still on the table and could have a big impact for low-income students.

The latest proposal would add $500 to the maximum Pell grant, currently set at $6,495. The award — a key part of the federal financial aid system since the 1970s — doesn’t need to be paid back and can be used by qualifying low-income students to pay for tuition, fees, room and board, as well as other education-related costs.

The proposed boost is smaller than the $1,400 increase Biden originally called for in his Build Back Better agenda and falls well short of his campaign pledge to double the maximum amount, something many Democrats have been pushing in recent years.

Negotiations are ongoing over Biden’s 10-year spending plan, originally priced at $3.5 trillion, and changes could still be made. Some moderate Democrats are concerned the price tag is too big, and Biden revealed this week that some of his priorities won’t make the cut, including his plan to make two years of tuition free at community colleges.

Biden, whose wife Jill Biden is a community college professor, stressed during a CNN town hall Thursday that making community college free remains a priority for his administration even if it doesn’t make it into this bill.

“I’m going to get it done,” Biden said. “If I don’t I’ll be sleeping alone for a long time,” he added with a laugh.

A big benefit of Pell grants is that they can help cover education-related costs beyond just tuition and fees.

First-time, full-time undergraduate students at public two-year colleges have been receiving enough grant aid on average to cover their tuition and fees — which average $3,770 a year — since the 2009-10 school year, according to the nonprofit College Board.

It’s the other costs for books, laptops, transportation, housing and food that many community college students end up taking out loans to pay for. Those additional expenses total an average of $14,780 a year for a full-time student and would not necessarily be covered by a free tuition program.

Still, advocates for free community college argue that these programs are worthwhile, partly because they lead to an increase in enrollment. The clear messaging that tuition is free makes students more aware of the financial aid available.

Pell grants don’t cover as much as they used to

Pell grants are available to undergraduates at public and private four-year colleges, too. Roughly 7 million students have received a Pell grant annually over the past five years. The amount of the grant is awarded on a sliding scale and is based on the family’s estimated financial need, determined by information the student submits on the Free Application for Federal Student Aid, known as the FAFSA. The smallest award is currently worth $650.

But the Pell grant amount, which is set by Congress on an annual basis, covers a smaller portion of the cost of college than it once did. The annual increase has ranged between $100 and $175 over the past five years.

“We are thankful for any increase,” said Karen McCarthy, vice president of public policy and federal relations at the National Association of Student Financial Aid Administrators. The group is calling on Congress to double the Pell grant.

“But even with these small increases year over year, the maximum Pell grant award doesn’t have nearly the buying power it did when it was created,” she added. 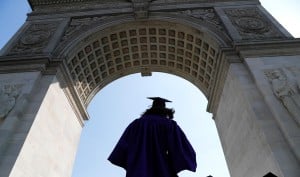 Free community college is out of Biden’s plan, but a bigger Pell grant could still help cut costs