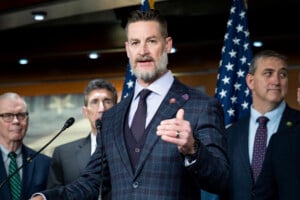 On January 23, Republican Rep. Greg Steube, pictured here in Washington, DC, on January 11, announced that he will be “sidelined” in his home state for several weeks as he recovers from multiple injuries suffered in an accident at his Sarasota property last week.

RAW: MD: BALTIMORE SHOOTING 'WE NEED TO STEP UP'

Don Lemon responds to Colbert's dig at his hoodie-suit combo