Guilty verdicts in trial over Ahmaud Arbery’s murder were an answer to prayers, family says. Here’s what comes next 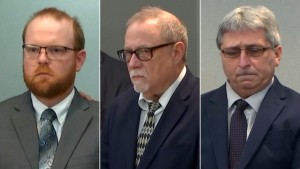 Guilty verdicts in trial over Ahmaud Arbery’s murder were an answer to prayers, family says. Here’s what comes next

The family of Ahmaud Arbery reacted with joy and relief Wednesday after three White men were found guilty of charges relating to the 25-year-old Black man’s murder following a trial seeped in issues such as race and the rights and limitations of self-defense.

As the first verdict was being read, Marcus Arbery Sr., Arbery’s father, “leapt up and cheered,” according to a pool reporter in the room.

“I never saw this day back in 2020, I never thought this day would come,” said Ahmaud Arbery’s mother, Wanda Cooper-Jones, as she stood just outside the courthouse doors following the verdicts.

She thanked God and all the people who marched and prayed for her family.

“Quez, which you know him as Ahmaud, I know him as Quez. He will now rest in peace,” his mother said to the crowd of people gathered, who had celebrated upon hearing the news.

“The verdict today was a verdict based on the facts, based on the evidence and that was our goal, was to bring that to that jury so that they could do the right thing,” said prosecutor Linda Dunikoski, adding, “the jury system works in this country.”

Judge Timothy Walmsley has yet to set a sentencing date for the three convicted men.

The jury on Wednesday found Travis McMichael guilty of malice murder, four counts of felony murder, two counts of aggravated assault, one count of false imprisonment and one count of criminal attempt to commit a felony in Arbery’s death on February 23, 2020, just outside Brunswick, Georgia.

His father, Gregory McMichael, was acquitted only on a malice murder charge and was found guilty of the other charges faced by him and his son.

The men now face a sentence of up to life in prison without the possibility of parole on each of the murder charges, 20 years on each of the aggravated assault charges, 10 years on the false imprisonment charge, and 5 years on the criminal attempt to commit a felony charge. Walmsley will decide whether the sentences will be served consecutively or concurrently.

Prosecutors have indicated they will seek sentences of life in prison without the possibility of parole.

Jason Sheffield and Bob Rubin, attorneys for Travis McMichael, said they planned to appeal the conviction.

When asked about the location of the trial, Sheffield said he was sure their decision not to file for a change of venue would be discussed “ad nauseam” and could become a part of a future appeal but said they did not have any second thoughts about the decision.

Kevin Gough, Bryan’s attorney, said he planned to appeal the decision regarding his client, noting, “We believe the appellate courts will reverse this conviction.”

During the trial, Gough made remarks that were widely considered insensitive, beseeching the court to prevent high-profile Black pastors from sitting in the public gallery. And one prosecutor told CNN Wednesday the decision to raise the issue may have been intentional to help with an appeal.

Gough said on November 11 he had “nothing personally against” the Rev. Al Sharpton, who was in attendance alongside Arbery’s family, adding, “We don’t want any more Black pastors coming in here or other Jesse Jackson, whoever was in here earlier this week, sitting with the victim’s family trying to influence a jury in this case.”

Walmsley ruled that as long as court proceedings were not disrupted, there would be no sweeping bans. Gough apologized for his statements the next day.

The Rev. Jesse Jackson had not made an appearance at the time of the comments, but later sat in the gallery with Arbery’s parents.

Dunikoski, the prosecutor, told CNN’s Jim Acosta after the verdict that Gough’s comments about Black pastors — though made without the jury present — were strategic.

“Mr. Gough is a very, very good attorney, and he purposefully and intentionally and strategically, I believe, did what he did in an effort to attempt to insert potentially some error into the case in case he lost the case and it went up on appeal,” she said.

All three were indicted in April on separate federal hate crime charges, which include interference with rights and attempted kidnapping, according to the US Department of Justice. Travis and Gregory McMichael were also charged with using, carrying, brandishing and discharging a firearm during and in relation to a crime of violence.

Federal prosecutors said all three men “used force and threats of force to intimidate and interfere with Arbery’s right to use a public street because of his race.”

The McMichaels and Bryan pleaded not guilty to the federal charges.

Sheffield and Rubin, on behalf of Travis McMichael, said after the federal indictment, “We are deeply disappointed that the Justice Department bought the false narrative that the media and state prosecutors have promulgated.”

Arbery Sr.’s attorney Ben Crump said at the time, “This is an important milestone in America’s uphill march toward racial justice, and we applaud the Justice Department for treating this heinous act for what it is — a purely evil, racially motivated hate crime.”

The federal trial is set to take place in February. Since they were being held on the state charges, there has been no federal bond hearing yet.

If convicted on the federal charges, they could face an additional penalty of up to life in prison.