Heather Heyer’s mom on Unite the Right verdict: Free speech is protected, but violent actions are not 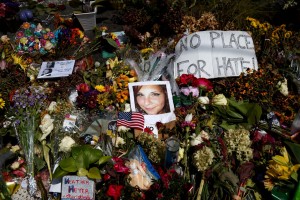 Heather Heyer’s mom on Unite the Right verdict: Free speech is protected, but violent actions are not

After a jury awarded more than $26 million in damages in a lawsuit against White nationalists who organized and participated in a violent rally in 2017, the mother of a woman who was killed there said the verdict proves speech may be protected but violent actions are not.

Heather Heyer was killed and dozens were injured when James Alex Fields Jr. drove a car into a crowd of counterprotesters to the rally. Fields is serving multiple life sentences for killing Heyer.

The jury in a civil trial on Tuesday found the defendants, which included some of the most prominent figures of the alt-right — Jason Kessler, Matthew Heimbach, Richard Spencer and Christopher Cantwell — liable on a state conspiracy claim and other claims regarding the Unite the Right rally in Charlottesville, Virginia.

“The defendants seemed to want to argue that their speech was protected by First Amendment rights, and I would say speech is protected. Action from that speech is not protected,” said Susan Bro, Heyer’s mother. “So when you speak and you, yourself and others act on that speech, it is no longer protected.”

The events surrounding August 11-12, 2017, saw White nationalists and supremacists marching through Charlottesville and the University of Virginia campus chanting, “Jews will not replace us,” “You will not replace us” and “Blood and soil,” a phrase evoking Nazi philosophy on ethnic identity.

The violence — which enveloped the rally to protest the planned removal of a statue of Confederate Gen. Robert E. Lee — reached a crescendo when Fields, who was protesting the statue’s removal, sped his car through the crowd, injuring dozens and killing Heyer.

Bro said she wanted people to “stop putting Heather on a pedestal.”

“She was a normal 32-year-old, feisty woman,” Bro told CNN’s John Berman. “She had rough edges, just like anybody, and she was a random murder in a mass car attack. She just happened to be the one that took the brunt force.”

“So what I want you to take away from that is, stand up and do the right thing. You don’t know what kind of impact that will have,” Bro said.

“This is the first, and God knows I hope, the only murder in my life,” she said. “I don’t know that you ever feel complete justice. But I don’t know what else could be done.”

The plaintiffs included town residents and counterprotesters injured in the violence, and Bro said she was proud of them “for not buckling under pressure when questioned by the defendants.”

Attorneys for the plaintiffs said on Tuesday they were “thrilled” with the verdict.

“Today’s verdict sends a loud and clear message that facts matter, the law matters, and that the laws of this country will not tolerate the use of violence to deprive racial and religious minorities of the basic right we all share to live as free and equal citizens,” plaintiffs’ attorneys Robert Kaplan and Karen Dunn said Tuesday.

Despite the large jury award, there’s the question of whether the plaintiffs will see much of that money. While Fields is serving multiple life sentences, some of the other defendants — individuals and White supremacist organizations — have indicated they are financially stressed.

“The defendants in the case are destitute, none of them have any money,” said attorney Joshua Smith, who represented three defendants. “I don’t know how any of the plaintiffs are going to get anything for any of this.”