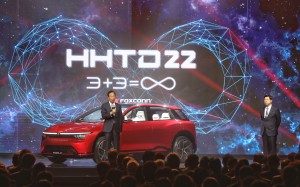 Terry Gou, founder of Foxconn Technology Group, unveils the Model B crossover at an event in Taipei, Taiwan. Foxconn recently showed off two new electric vehicles at an event in Taipei as the company expanded on its plans to do for cars what it’s already done for phones.

Schiff responds to McCarthy's threat to remove him from committee

JCPenney was once a shopping giant. Can it make a comeback?

RAW: CO: CLUB Q SHOOTING: FIERO: I GOT TO PROTECT MY KID

Police officers across the US have quit their jobs in recent days. Here is where there have been resignations