The criminal contempt referral from the House of Representatives against right-wing agitator Steve Bannon landed at the DC US Attorney’s Office on Thursday with unusual fanfare, setting off potentially weeks of legal decision-making at the Justice Department.

The House’s vote 229-202 vote Thursday to hold Bannon in contempt for defying its January 6 committees’ subpoenas sets in motion a court process that begins with prosecutors considering legal questions and building a case.

The DC US Attorney’s office received the referral via a courier Thursday night. It could decline to charge Bannon, charge him quickly, or use a grand jury to investigate and indict the longtime adviser to former President Donald Trump.

There’s no strict timeline for how much time the Justice Department will take in deciding whether to move forward with the prosecution. And it’s not absolute that Bannon will be charged.

Still, in past cases, such decisions have been made fairly quickly.

It took only eight days for a grand jury to bring the last contempt of Congress charge following a House referral, against Reagan-era official Rita Lavelle, who was ultimately acquitted of the charge.

“If they do apply the facts and the law, I think it’s actually quite simple, because Steve Bannon has no absolute right to immunity, to somehow simply fail to show up,” Rep. Adam Schiff, a member of the House’s January 6 committee, told CNN’s Wolf Blitzer on Thursday.

The US Attorney’s Office in DC is currently being led by acting US Attorney Channing D. Phillips, a three-decade veteran of the department. By and large, the House Committee is taking a hands-off approach as Phillips decides how to proceed.

“I imagine it will be handled within the US Attorney’s office, but they’ll consult with the Justice Department before taking any major steps,” said Jonathan Shaub, a University of Kentucky College of Law professor who worked at the Justice Department’s Office of Legal Counsel when Congress in 2014 sought criminal contempt for IRS official Lois Lerner.

The US Attorney will write up its legal reasoning on the case and would need sign-off from top leaders at the Justice Department, Shaub and other sources familiar with the process say.

“The Department of Justice, as with all criminal referrals, will evaluate the matter based on the facts and the law, consistent with the Principles of Federal Prosecution,” Bill Miller, spokesman for the US Attorney’s Office for the District of Columbia said in a statement earlier this week.

What prosecutors will be looking at

Typically, the office’s public integrity section of the DC US Attorney’s office handles congressional contempt allegations and other referrals.

Line attorneys in the office now may collect evidence about Bannon’s noncooperation with Congress’ investigation, with a focus on how much he has said regarding intentions to violate the subpoena. The House issued the subpoenas to the former Trump adviser on September 23, with deadlines of October 7 for the requested documents and October 14 for an interview with the committee. Bannon did not cooperate with either request and his attorney sent a letter to the committee explaining his rationale.

Bannon’s discussions with others about testifying — especially Trump — may be key to a charge, and to his defense.

Trump sent a letter to Bannon in early October telling him the committee was seeking information that was “potentially protected from disclosure,” and that Bannon shouldn’t testify “concerning privileged material in response” to the House subpoena.

The department will have to weigh whether Trump’s directive to Bannon left him the right to not show up at all, as the committee may have been interested in asking Bannon about communications he had with people other than the President.

At a trial on a contempt charge, prosecutors will have to prove whether Bannon knew he was breaking the law when he didn’t testify. As part of his defense, he could potentially point to legal advice he’s received, the former President’s direction or even attack Congress’ ability to investigate him in the January 6 probe.

As prosecutors consider the matter, their evidence-gathering phase could include subpoenaing witnesses to a grand jury who could testify about what Bannon told them and provide details about the reasoning for his noncooperation with Congress.

So far, Bannon has only briefly spoken on his own podcast about the contempt vote. But on an October 11 show, he and another Trump acolyte, Rudy Giuliani, joked about the House committee putting them in jail.

“I don’t intend to go without you,” Giuliani said on Bannon’s show, “War Room.” “I’m going with you and a couple of other guys that sound interesting … I’m counting on you to get hooked up,” he added. “We’ll do radio and television all day.”

If the department does decide it wants to prosecute Bannon, it will likely put the matter first before a grand jury, which will consider evidence — including potential witness testimony. Prosecutors do also have the option of issuing a criminal complaint first, which would then give them 30 days to obtain a grand jury indictment.

The big legal questions DOJ will be considering

In his letter to the committee laying out why Bannon was not cooperating in the probe, Bannon’s attorney Robert Costello wrote that “the executive privileges belong to President Trump” and “we must accept his direction and honor his invocation of executive privilege.” Costello’s letter potentially could become a key piece of what prosecutors look at in investigating the case against Bannon.

Legal experts note that Bannon was not working for the government at the time of the insurrection and the ability of a former president to assert executive privilege is an unsettled question being tested now in a court case Trump has brought over White House records held by the National Archives.

President Joe Biden’s White House has so far declined to assert executive privilege regarding witnesses and documents the House Committee has demanded. The White House counsel’s office has written to Bannon’s attorney to tell him they won’t support his refusals to testify.

“President Biden’s determination that an assertion of privilege is not justified with respect to these subjects applies to your client’s deposition testimony and to any documents your client may possess concerning either subject,” deputy White House counsel Jonathan Su wrote to Costello on October 18.

Other witnesses, including former officials working for the government at the time of the attack, have cooperated with the congressional Jan. 6 probes, and three Trump administration officials that have been subpoenaed for documents and testimony are in negotiations.

Prosecutors will also likely think about whether Bannon’s defense, even if legally shaky, could attract sympathy from a jury.

“I think he will probably have to claim ‘innocent bystander status’ as a defense,” Shaub said. “I don’t think that will necessarily stop them from prosecuting, but I think they’ll have to consider, is it a viable defense to say: ‘if I was under direction from a former president who has this sort of unexplored, ambiguous interest in privilege. I am a private citizen, I can’t resolve constitutional questions until there is some that resolves this.'” 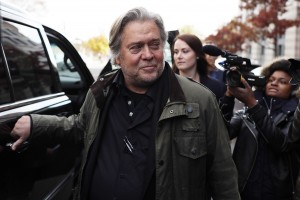