Mayor says fire is contained in Passaic, New Jersey, with no major injuries or evacuations 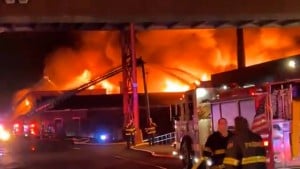 Mayor says fire is contained in Passaic, New Jersey, with no major injuries or evacuations

Firefighters battled a massive, 11-alarm fire Friday night at a chlorine manufacturing plant in New Jersey that could be seen from miles away and led to warnings about air quality in the region.

One firefighter was injured by debris and taken to a hospital, Passaic Fire Chief Patrick Trentacost Sr. said.

Lora confirmed to CNN on Saturday morning that the fire was contained.

Lora also said firefighters were able to stop the fire from reaching the main part of a chemical plant where most of the chlorine is stored.

“As a result of the tireless efforts of our firefighters, they were able to contain the fire away from the highest concentration of chlorine,” Lora said. He added that the response of first-responders has been “heroic” and “remarkable,” especially given the frigid temperatures.

Trentacost said his firefighters were battling “extreme” conditions, with the temperature dipping close to 14 degrees, and the windchill making it feel even colder.

“Water, literally in seconds, was freezing right on us. If you look at our trucks right now, we have to defrost everything. We’re using flares to move hoses,” Trentacost said.

It’s still too early in the incident to know what the cause of the fire was, but the investigation is ongoing, Trentacost told WABC. He added that he believes the building that caught fire was built in 1906.

Lora told CNN that over 200 firefighters from several departments responded, and Gov. Phil Murphy called him to offer assistance.

Lora said earlier that one firefighter was taken to an area hospital for an eye injury due to falling debris and 17 additional people experienced other minor injuries due to slips and falls, but there was no major injury or death.

The mayor said earlier Saturday on Facebook Live that no evacuations of nearby buildings were ordered because the air quality in the area was deemed to be acceptable after an assessment.

“Right now, there are acceptable levels, so there is no reason to evacuate,” Lora said.

Earlier, Lora urged residents who lived near the fire to keep their windows and doors closed.