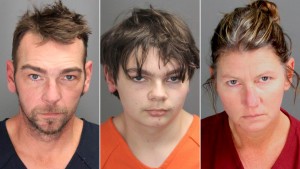 Michigan school shooting suspect and his parents were isolated in the same facility and under suicide watch, sheriff said

Authorities executed a search warrant Monday at the home of the man who helped Ethan Crumbley’s parents before they were arrested, Oakland County Undersheriff Michael G. McCabe told CNN.

Sikora, a metro-Detroit artist, was “questioned extensively” to determine if he assisted in hiding James and Jennifer Crumbley, the release said.

“The issue for Detectives is what did Sikora know and when did he know it,” the release said, adding the search warrant on Sikora’s home was executed “immediately after questioning.”

“Sheriff’s Detectives went to Sikora’s Troy home and executed a search warrant, seizing several digital devices for examination. The information will then be presented to prosecutors to determine if charges are appropriate,” the release said.

Crumbley’s parents were due to attend an arraignment Friday. Their failure to appear led authorities to search for the couple, who were found in an industrial building in nearby Detroit on Saturday.

Dass told CNN on Sunday his client knew the Crumbleys were using his workspace, but he “did not really know what was going on” and didn’t know the couple “had active warrants” when they were discovered and subsequently arrested.

Sikora “got roped into it,” Dass said, but he declined to say why he allowed the couple to stay in the workspace or provide additional details on their relationship other than to say “he knew them, but not well.”

Ethan Crumbley, 15, is accused of fatally shooting four classmates and wounding several others at Oxford High School last week. His parents were charged with four counts of involuntary manslaughter in the same incident, CNN has reported. All three have pleaded not guilty.

Michigan Attorney General Dana Nessel told CNN’s Dana Bash on Monday that while she doesn’t have all the facts on the case, it does seem appropriate for the parents to face extra charges connected to the manhunt.

“If they are convicted, there are actually additional points that are scored for the obstruction of justice,” Nessel said. “They’re likely to get higher sentences and more time in the event they’re convicted because of this.”

School officials at Oxford High School had legal grounds to search Crumbley’s backpack and locker, but did not do so on the day of the shooting, Oakland County Prosecutor Karen McDonald told CNN on Monday.

McDonald didn’t say why such a search was not conducted, but noted, “We don’t know exactly if that weapon was in his bag, where it was. We just know it was in the school and he had access to it.”

When asked whether school staff members might be prosecuted, McDonald replied to CNN’s Brianna Keilar, “We haven’t ruled out charging anyone.”

McDonald said the shooting last Tuesday could have been prevented and that the suspect’s parents are being criminally prosecuted because “we have to start addressing how somebody like (Ethan Crumbley) can so easily get their hands on a weapon and we have to hold the people responsible who allowed that to happen.”

“I’m sympathetic to parents. My husband and I have raised five children,” McDonald said, adding, “I’m certainly not suggesting that parents should be criminally prosecuted for any bad act of a child. But in this case, you can’t possibly look at their actions and say that they didn’t have reason to believe that there was real concern about a violent act.”

On the day of the shooting, Crumbley’s parents met with school officials after a teacher became concerned by some of the teen’s drawings and statements. But — because he had no prior infractions on his record — he was allowed to return to class.

“All of this could have been prevented if he hadn’t had access (to a gun) or if just one of those parents had said, ‘I’m concerned about what I’m seeing right now and I also want you to know we just bought him a gun for Christmas,’ and that didn’t happen,” McDonald said.

Nessel is offering a team from her office to conduct a “full and comprehensive” review of the events that led up to the shooting, her office told CNN in an email on Monday.

The offer was made in response to a letter sent by Oxford Community Schools Superintendent Tim Throne to the school community Saturday saying the district would be requesting an independent review of the events surrounding the shooting.

Nessel was critical of the district’s decision to hire a third party to conduct an investigation, saying in an interview with CNN affiliate WXYZ she does not find it appropriate.

“We’ve seen this happen before, and unfortunately, and I’m not accusing Oxford schools of anything, but in the past, we’ve seen this where it’s really more of an effort to protect the client who hired you than to get to the truth of the matter,” Nessel said.

CNN has reached out to the attorney general’s office and the school district to determine what the next steps are.

“It seems like such a small inconvenience to safely store or secure your weapon to get a gun lock — which most police departments give away for free — in order to ensure that if you reside in a home where a child lives or is present, that that child cannot have unfettered access to that firearm,” she said.

James and Jennifer Crumbley and their son were being housed at the same facility and monitored under suicide watch, authorities said.

Staff at the Oakland County Jail in Pontiac were checking on the three “multiple times an hour,” Oakland County Sheriff Michael Bouchard said at a news conference Saturday.

Bouchard said the three are not able to communicate with each other in the jail. However, Ethan Crumbley is aware his parents are in custody, according to Paulette Michel Loftin, Crumbley’s court-appointed attorney.

Loftin told CNN she met with the suspect twice and told him that his parents were in custody and at the jail.

Loftin said she has not yet seen any of the evidence that prosecutors have but expects to get it by Wednesday.

Loftin said Crumbley’s next court date is December 13 and will occur over Zoom. The proceeding will set a date for Crumbley’s next court appearance and preliminary examination, during which prosecutors are expected to give even more evidence and the judge will decide to go forward with the trial.

Ethan Crumbley was charged as an adult Wednesday with terrorism, first-degree murder and other counts in the shooting that killed Madisyn Baldwin, 17; Tate Myre, 16; Hana St. Juliana, 14; and Justin Shilling, 17. In court Wednesday, a defense attorney submitted a plea of not guilty on his behalf.

James and Jennifer Crumbley have pleaded not guilty to the involuntary manslaughter charges, which were filed by prosecutors who allege they provided unrestricted access to the gun Ethan Crumbley is accused of using.

In a Sunday letter to the school community, Thorne said a reopening plan includes a “soft opening” with a law enforcement presence as well as trained clinicians to support students and staff.

“The plan for high school students is still evolving and we will communicate it to you once it is solidified. In the meantime, we are working to create opportunities for the students to be together in our community,” Throne wrote.

Elementary schools and a few select programs will return Friday for a half day and next Monday, December 13, for full days.