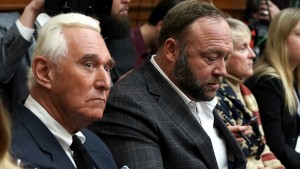 The latest batch of subpoenas indicates the committee continues to focus, in part, on organizers and funding of the “Stop the Steal” rallies that took place on January 5 and 6, as well as earlier rallies in the months leading up to the US Capitol attack.

Also subpoenaed by the committee Monday: Dustin Stockton and Jennifer Lawrence, key players in the “Stop the Steal” movement after the election, who the committee noted are engaged to each other.

Stockton was one of the administrators of a “Stop the Steal” Facebook group that amassed hundreds of thousands of followers before it was shut down by the social media company on November 5 — the day after it was launched. According to the committee’s subpoena letter, Stockton helped organize a series of rallies after the November 2020 election up to the rally held at the Ellipse in Washington, DC, on January 6, aimed at supporting then-President Trump and his claims of election fraud.

Taylor Budowich, who is currently the primary political spokesperson for the former President and serves as communications director for the Save America PAC, was the final individual subpoenaed Monday.

“The Select Committee is seeking information about the rallies and subsequent march to the Capitol that escalated into a violent mob attacking the Capitol and threatening our democracy. We need to know who organized, planned, paid for, and received funds related to those events, as well as what communications organizers had with officials in the White House and Congress,” Democratic Rep. Bennie Thompson of Mississippi, who chairs the committee, said in a statement.

“We believe the witnesses we subpoenaed today have relevant information and we expect them to cooperate fully with our effort to get answers for the American people about the violence of January 6th,” he added.

The committee is asking the five individuals to produce documents on December 6 and has scheduled deposition dates for them throughout mid-December.

In its letter to Jones, the committee cites press reports and his own statements to claim that Jones worked with January 6 rally organizers Cindy Chafian and Caroline Wren, both of whom have been subpoenaed by the select committee, in “facilitating a donor, now known to be Julie Fancelli, to provide what [he] characterized as ‘eighty percent’ of the funding” for the rally held on the Ellipse on January 6.

The committee states that Jones was denied a speaking spot at the January 6 rally but that his previous comments indicate he was designated to “lead a march to the Capitol, where President Trump would meet the group.” The committee acknowledged specifically that once at the Capitol, Jones told people “not to be violent” and to gather and wait for Trump to speak. Even though Trump never came to the Capitol, the committee said the location where Jones told people to wait “coincided” with the same place that “Stop the Steal” rally organizer Ali Alexander obtained a permit for that day.

In March, CNN reported that police in Washington, DC, were investigating an allegation that Jones threatened to push another pro-Trump political organizer off of an event stage in December, according to people familiar with the incident.

The allegation was filed with DC police by Kylie Jane Kremer, executive director of the organization Women for America First, a group that helped organize a series of post-election rallies, including one in a park south of the White House that preceded the Capitol riot on January 6.

Kremer was previously subpoenaed by the select committee.

The alleged threat occurred outside the Willard InterContinental hotel, located about two blocks from the White House, according to the police report. The Willard served as an election-related “command center” for Trump allies around January 6, and the committee has expressed significant interest in learning more about what was happening there at that time.

In its subpoena letter, the committee said Budowich “reportedly solicited a 501c(4) organization to conduct a social media and radio advertising campaign encouraging attendance at the January 6th Ellipse rally and advancing unsupported claims about the result of the election.”

The committee cited information on file with the panel to claim that Budowich directed approximately $200,000 from a source or sources to the 501(c)(4) that was “not disclosed to the organization to pay for the advertising campaign.”

Budowich was a senior adviser for the Trump 2020 campaign, specifically working with Donald Trump Jr. and his girlfriend Kimberly Guilfoyle. He is a longtime right-wing political operative, working as senior communications adviser for Ron DeSantis during his successful campaign for governor of Florida in 2018 and once served as executive director of the Tea Party Express.

The committee might have particular interest in Budowich’s connection to Guilfoyle. The former Fox News personality played a big role in the planning and preparation of the January 6 rallies. The committee also cited Wren as potentially being “involved in facilitating the transfer of some or all of those funds” that the committee claims Budowich is connected to.

In its subpoena letter to Stockton, the committee cited press reports to claim that he was among the group of rally organizers who communicated with Trump and other White House officials, including Trump White House chief of staff Mark Meadows, who has been in an emerging standoff with the committee over his subpoena.

The committee claimed that Stockton was among those who warned the White House of the possible danger from an unpermitted march that would reach the Capitol while Congress was certifying election results, and that Stockton specifically expressed his concerns to Katrina Pierson, a former Trump campaign official reportedly involved in the organization of the January 5 and January 6 rallies who served as a liaison between rally organizers and the White House.

Stone, Jones, Stockton and Lawrence also have longstanding ties to Trump ally Steve Bannon, who is awaiting trial on contempt of Congress charges stemming from his refusal to cooperate with a subpoena from the committee.

Both Stockton and Lawrence were involved in Bannon’s “We Build the Wall” crowdfunding group, and in August 2020, federal agents raided their recreational vehicle in Mesquite, Nevada, hours before prosecutors unsealed charges accusing others involved in the group, including Bannon.

Stockton and Lawrence released a statement Monday evening saying they had expected the subpoenas, but added, “We are concerned that the timing during the week of Thanksgiving, while most normal business is closed, is further demonstration that this committee is not acting in good faith.”

“In the many months since January 6th we have granted many reporters and outlets extensive on-the-record interviews because we are committed to getting to the truth about what happened. We remain committed to that transparency and pray for the opportunity to share our experiences to the public without the taint of misinformation that has become customary,” Stockton and Lawrence continued.

Meanwhile, the origins of the “Stop the Steal” slogan can be traced to Stone, a self-described “dirty trickster” whose 40-month prison sentence for seven felonies was cut short by Trump’s commutation last July.

A combination of documents provided to the select committee, press reports and Stone’s statements demonstrate how he not only promoted his appearance at a January 6 “Stop the Steal” event, but solicited donations for it and stated his purpose at the rally was to “lead a march to the Capitol,” according to the panel’s subpoena letter to him. The committee added that, according to media reports, Stone used members of the Oath Keepers as personal security guards, several of whom stormed the Capitol and at least one who has been indicted, while he was in Washington.

Stone issued a statement responding to the subpoena, calling the allegations “categorically false.”

“I have said time and time again that I had no advance knowledge of the events that took place at the Capitol on that day. Any statement, claim, insinuation, or report alleging, or even implying, that I had any involvement in or knowledge, whether advance or contemporaneous, about the commission of any unlawful acts by any person or group in or around the U.S. Capitol or anywhere in Washington, D.C. on January 6, 2021, is categorically false,” he said.

Stone was involved in the “Stop the Steal” movement’s rise to prominence around the 2020 election. Along with Bannon and Jones, he was among the most notable voices pushing conspiracy theories in the immediate aftermath of the 2020 election.

At the time, Stone appeared on Jones’ far-right radio show to trumpet groundless claims that Joe Biden was trying to steal the election, and Bannon echoed similar conspiracy theories on his podcast, calling the election “a mass fraud.”

Following the last major House inquiry into election integrity, after the 2016 election, Stone was convicted in federal court of obstructing Congress and telling five lies, about his efforts to contact WikiLeaks on behalf of the Trump campaign. He had sat for a more than a three-hour interview in 2017 with a Republican-led House committee.

At his criminal trial, which occurred before the end of the Trump administration, the Justice Department successfully argued Stone lied to Congress to protect Trump. Trump later pardoned him.

This story has been updated with additional reporting.