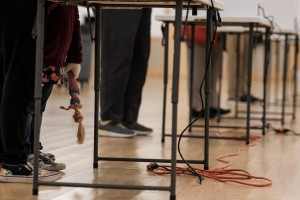 Ohio’s state supreme court ruled Friday that the state’s newly-drawn congressional map, which was passed by the GOP-controlled legislature, violates the state constitution because it “unduly favors the Republican Party and disfavors the Democratic Party.”

The court’s Republican chief justice joined the three Democratic justices in the majority opinion, while the court’s three other justices dissented.

State lawmakers will now have 30 days to draw a new congressional district plan after the court ordered the legislature to draw a new map that “is not dictated by partisan considerations,” or it falls to the Ohio Redistricting Commission to craft a new plan within 30 days.

“When the dealer stacks the deck in advance, the house usually wins,” Justice Michael Donnelly wrote for the majority. “That perhaps explains how a party that generally musters no more than 55 percent of the statewide popular vote is positioned to reliably win anywhere from 75 percent to 80 percent of the seats in the Ohio congressional delegation. By any rational measure, that skewed result just does not add up.”

The court also found that the map “unduly splits” three counties — Hamilton, Cuyahoga, and Summit Counties — in a way that is prohibited under the state constitution.

Republicans are well positioned to win the House majority, as the party out of power traditionally does well in midterm elections, but Friday’s ruling is a setback for Ohio’s Republicans.

Plaintiffs and other opponents of the map celebrated Friday’s ruling.

“Once again, the Ohio Supreme Court did what the legislature refused to do — listened to the will of Ohio voters,” Elizabeth Walters, the chair of the Ohio Democratic Party, said in a statement. “Any map that further rigs our state in favor of one party over another is unacceptable and we’ll be watching closely to make sure any new maps reflect the fair representation that Ohioans overwhelmingly called for.”

Ohio was apportioned 15 congressional seats following the 2020 US Census — one less seat than in 2011. Under the rejected maps, Republicans would’ve had the advantage in as many as 12 or 13 of them.

The redistricting plan was passed by the Republican-controlled General Assembly in November without support from Democratic members, and Republican Gov. Mike DeWine signed the bill later that month.

The map was quickly challenged in court, with two lawsuits filed by Ohio voters and voting groups that alleged the map was “unconstitutional partisan gerrymandering” and didn’t follow the state Constitution’s process of adopting congressional redistricting plans, which were reformed following Ohio voters’ overwhelming approval in 2018.

On Wednesday, Ohio’s high court also rejected the state’s new map for state House and Senate districts and ordered the state’s redistricting commission to submit a new plan in 10 days.

This story has been updated.

How much trouble is Kyrsten Sinema actually in?