‘Our league definitely got this wrong’: LeBron James and other NBA figures respond to Robert Sarver decision 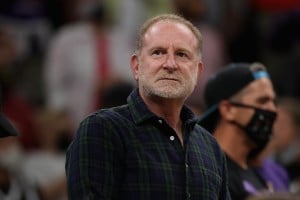 LeBron James has criticized the NBA for the punishment handed down to Phoenix Suns owner Robert Sarver, seen here in October 2021 in Phoenix, Arizona, after an investigation found he engaged in hostile, racially insensitive behavior.