Russian intelligence agents believed to have directed White supremacists to carry out bombing campaign in Spain, US officials say 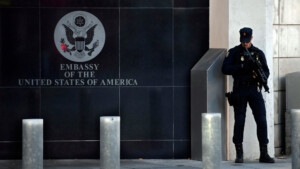 A Spanish policeman stands guard near the US embassy in Madrid, on December 1, 2022, after they have received a letter bomb, similar to one which went off at the Ukrainian embassy.

The dodo is the poster child for human-caused extinction. Scientists want to bring it back