The drought in California this summer was the worst on record

The West’s historic, multi-year drought is threatening water supply, food production and electricity generation. It has drained reservoirs at incredible rates and fueled one of the most extreme wildfire seasons the region has ever experienced.

In California, drought conditions this summer were the most extreme in the entire 126-year record — a clear sign of the role climate change plays in the perilous decline of the state’s water resources. Data from the National Oceanic and Atmospheric Administration shows that drought months are becoming the new normal, with rainy months becoming fewer and farther between.

Climate researchers say two major factors contributed to this summer’s severe drought: the lack of precipitation and an increase in evaporative demand, also known as the “thirst of the atmosphere.” Warmer temperatures increase the amount of water the atmosphere can absorb, which then dries out the landscape and primes the environment for wildfires.

“As we’re getting these very extreme heat waves, it’s just making the drought even worse, even though drought is initially caused by the lack of precipitation,” Julie Kalansky, a climate scientist at Scripps Institution of Oceanography in San Diego, previously told CNN. “But during the dry months of much of the West, these heat waves just continue this drying throughout the summer and into the fall.”

Based on the Palmer Drought Severity Index, July 2021 was the driest month on record in California since records began in 1895. June, July and August were three out of the states five driest months on record.

The index, also known as the PDSI, takes into account precipitation, runoff and how much moisture is evaporating out of the ground. It is used widely by scientists and researchers and is and a key factor that informs the weekly report of the US Drought Monitor.

On the PDSI scale, anything below -4.0 is considered “extreme drought.” California’s PDSI this summer ranged from -6.7 in June to -7.07 in July.

This summer tied the Dust Bowl summer in 1936 for the hottest on record in the US. It was also the hottest summer on record in California, where the persistent heat pushed almost 50% of the state into what the US Drought Monitor classifies “exceptional drought” — its most extreme classification.

The prolonged drought California is experiencing began in 2012. Since then, wet months have been rare, with just two notable wet periods: Winter 2016-2017 and Spring 2019.

Before this year, 2014 held the record for the most extreme drought conditions, with June and July that year facing similar circumstances as today.

Scientists reported in August that as the planet warms, droughts that may have occurred only once every decade or so now happen 70% more frequently. In the Southwest, officials at the National Oceanic and Atmospheric Administration predict drought there is about to get worse with La Niña on the horizon.

Justin Mankin, assistant professor of geography at Dartmouth College and co-lead of NOAA’s Drought Task Force, previously told CNN that the only way to replenish the thirst of the atmosphere that’s fueling the West’s historic drought is to make deep cuts in global greenhouse gas emissions.

“The longer-term fate of this particular drought is murky, even though we expect more droughts to look like this one in the years to come,” he said. “The temperatures and evaporative demands associated with this drought were not possible without the global warming that’s occurred.” 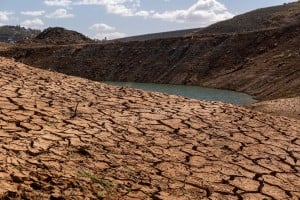 COVID: WHEN VACCINE ELIGIBILITY FOR KIDS COULD EXPAND