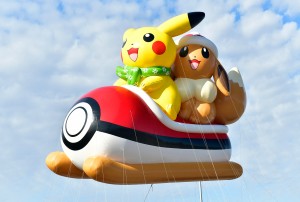 The Macy’s Thanksgiving Day Parade tradition returns to the streets of New York City this year.

The event will feature celebrity performances as well as some new balloons.

Unlike last year, which was for a TV-only crowd and the route was shortened to the area around the Macy’s flagship store at Herald Square due to the pandemic, Thursday’s parade will return to its previous route with guests invited to view along the way.

Whether you’re in person or on your couch, you can expect to see 15 massive balloons, 28 floats, plenty of singing and dancing, plus Santa Claus.

You’ll see some oldies like Snoopy and some newbies. Six new balloons will debut in the parade, Scientist by Netflix, Baby Yoda, Ronald McDonald, Ada Twist, and Pikachu and Eevee from Pokémon.

The 95th annual Macy’s Thanksgiving Day Parade will start at 9 a.m. ET and air on NBC as well as Telemundo. You can also livestream on Peacock.