‘They have us over a barrel’: Inside the US and German standoff over sending tanks to Ukraine 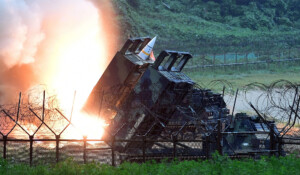 In this file photo released by the South Korean Defense Ministry, U.S. Army Tactical Missile System (ATACMS) fires a missile into the East Sea during a South Korea-U.S. joint missile drill in July of 2017.

Don Lemon responds to Colbert's dig at his hoodie-suit combo