‘This crowd is so big and unknown’: Pennsylvania Senate scramble could include Dr. Oz and former Bush official 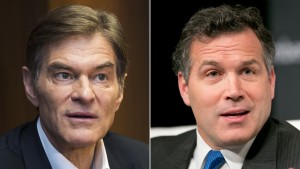 ‘This crowd is so big and unknown’: Pennsylvania Senate scramble could include Dr. Oz and former Bush official

Senate candidate Sean Parnell’s abrupt end to his campaign in Pennsylvania has shaken up the Republican primary field in a crucial race as the party seeks to win a majority next fall.

According to multiple Republican operatives in and outside of the Keystone State, the slate of GOP candidates could expand in coming weeks to include hedge fund executive David McCormick and daytime TV personality Dr. Mehmet Oz.

“Right now you’ve got a wide-open, fluid field in Pennsylvania,” said Charlie Dent, a former Republican congressman from Pennsylvania and a CNN contributor.

Republican Sen. Pat Toomey is not running for reelection, and Democrats see the seat as one of their top pickup opportunities heading into the 2022 midterms. Without Parnell as the frontrunner for the GOP nomination, Republicans are hoping to defend a seat held by a member of their party for all but two of the last 52 years.

McCormick, a former official in the Treasury Department under President George W. Bush, is a Pennsylvania native and West Point graduate. For years he has lived in Connecticut, where his hedge fund is located, but Republicans in Pennsylvania have been trying to recruit McCormick to come back to the state.

“There has been an accelerated outreach from Republican leaders, both within Pennsylvania and nationally, as well as donors, for Dave to come into the race,” said one person close to McCormick. “The Parnell departure has clearly created an opening where he’s seriously considering it.”

Pennsylvania Republicans are more perplexed that Oz, an Ohio-born doctor who attended medical school in Philadelphia and lives in New Jersey, is considering a run. Oz’s interest in this race was first reported in the Washington Free Beacon and Politico, but the host of the Dr. Oz Show said in a 2007 interview that he would “consider” running for office some day, calling himself a “moderate Republican.”

Representatives of Oz did not respond to CNN’s inquiries about his plans, but Republicans acknowledge that his celebrity could be a significant factor in a wide-open race.

“This crowd is so big and unknown,” said one GOP operative.

Parnell’s departure and the possible entrance of new candidates in the primary, which already includes Carla Sands and Jeff Bartos, has given Republicans a second chance to set their field after weeks of concerning developments with Parnell’s candidacy after former President Donald Trump backed him.

An Army combat veteran and former House candidate, Parnell had faced increased scrutiny of his personal life amid ongoing divorce and custody fights. Allegations against Parnell from his estranged wife, Laurie Snell, had raised concerns among some Republicans about his viability as a candidate. Snell had accused Parnell of being physically abusive toward her and injuring their children on two occasions, claims that Parnell has denied.

But on Monday, a Pennsylvania judge awarded Snell full legal custody and primary physical custody of their three children. The judge also determined that Parnell committed some abusive acts toward his wife in the past.

“There is nothing more important to me than my children, and while I plan to ask the court to reconsider, I can’t continue with a Senate campaign,” Parnell said in a statement.

Parnell spoke with Trump on Monday to inform him of his plans, according to Trump spokesman Taylor Budowich. It’s unclear whether the former President will back another person in the primary, though he has connections to multiple current and potential candidates.

Sands, a Pennsylvania-born Republican fundraiser, served under Trump as ambassador to Denmark, while McCormick’s wife is Dina Powell, who served as a national security official in Trump’s White House and remains close to Trump’s daughter and son-in-law, Ivanka Trump and Jared Kushner.

And in 2018, Trump appointed Oz to the Presidential Council on Sports, Fitness and Nutrition. (Another Trump appointee to the council, Herschel Walker, is running for the Republican Senate nomination in Georgia and has Trump’s endorsement.)

“I could see Trump sitting it out if both get in,” said one Republican operative close to the former President, referring to McCormick and Oz. “Or Oz doesn’t run, and Trump just goes all-in for Dave.”

Democrats in Pennsylvania also have a competitive primary, with Lt. Gov. John Fetterman and Rep. Conor Lamb among those vying for the nomination. Republicans in the state say the primary could pull the eventual Democratic nominee too far to the left in the swing state where winning suburban swing voters is the key to victory.

With the expected nationwide edge for Republicans in next year’s midterm elections across the country, Dent says the best thing Trump could do in the Keystone State is stay away from the GOP primary.

“Republicans have clear advantages going into the 2022 midterm, they just have to not blow it. And not blowing it requires former President Trump to behave constructively,” Dent said. “That would actually be constructive, to stay out of the primary.”