Florida Gov. Ron DeSantis said one of his biggest regrets in office was not speaking out “much louder” in March 2020, when former President Donald Trump advised the nation to stay home to slow the fast-spreading coronavirus.

DeSantis, a close ally of Trump, said he was involved in the early days of the White House’s pandemic response and had been offering advice to the President. But he was surprised when Trump made the decision that led to much of the US economy shutting down.

“I never thought in February, early March, that (coronavirus) would lead to locking down the country,” the Republican governor told the hosts of the conservative podcast “Ruthless” during an episode recorded Thursday. “I just didn’t. I didn’t think that was on the radar.”

It’s not the first time DeSantis has second-guessed actions taken by the Trump administration to slow the spread of the virus. In November, DeSantis questioned whether banning flights from China, the epicenter of the initial outbreak, was effective.

“I was probably the first governor in January of 2020 to call for travel restrictions from China. I supported President Trump when he did that,” DeSantis said. “But we have to take a step back and acknowledge that those travel restrictions just didn’t work.”

Trump considers the ban on Chinese travel one of the signature decision points of his pandemic response, and he kept it in place through the end of his presidency.

DeSantis’ remark Thursday follows reports that Trump has privately grumbled about the lack of fealty from his former protege. In conversations with allies, previously reported by CNN, Trump has expressed displeasure that DeSantis, one of the Republican Party’s most-talked about leaders, has declined to publicly rule out a 2024 presidential bid if Trump seeks another four-year term.

Indeed, days before DeSantis’ podcast appearance, Trump seemed to call out the Republican governor during an interview released Tuesday night. Trump described politicians who won’t say if they received a coronavirus booster shot are “gutless.” The quip was viewed as a thinly veiled knock on DeSantis, who declined to share his vaccination status during a widely shared December interview with Fox News host Maria Bartiromo.

“I watched a couple politicians be interviewed and one of the questions was, ‘Did you get a booster?’ Because they had the vaccine and they’re answering like — in other words, the answer is ‘yes’ but they don’t want to say it, because they’re gutless,” Trump told OAN. 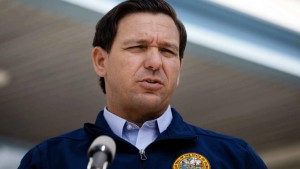 How much trouble is Kyrsten Sinema actually in?