Supreme Court Justice Clarence Thomas took his seat on the far end of the bench in 1991 feeling — he once said — “beat up” by the workload. A bitter confirmation battle marked by allegations of sexual harassment by Anita Hill was over, but liberals still lamented the fact that a 43-year-old conservative would take the place of retired civil rights icon Justice Thurgood Marshall.

Flash forward to 2021 and the most momentous term in recent history. The justices are poised to decide a major abortion case as well as broaden gun rights in a dispute out of New York.

Thomas, now 73, sits next to Chief Justice John Roberts in a chair reserved, in this instance, not only for the longest-serving member of the court, but for a Justice who finds himself at the center of a conservative judicial movement, lauded for 30 years’ worth of writing that has become, for some, currency for the future.

Since 2017, three new colleagues, perhaps swayed in their views by Thomas’ many opinions, have joined the bench. And Thomas, taking advantage of a revised oral argument format, has broken his historic silence and has launched the first question at every oral argument so far this term.

Meanwhile, he has amassed more than 100 former clerks, and some of these faithful followers have gone on to serve in the highest level of government and the judiciary. He started a tradition of taking his law clerks — who he refers to as his “kids” — to the Gettysburg battlefields at the end of each term to remind them of the nation’s past.

Thomas — to steal a word from the Gen Z culture — is now an influencer.

At an event Thursday night, hosted by The Heritage Foundation to celebrate his legacy, Thomas addressed a crowd of the conservative faithful, referencing his more difficult days, and thanking those who had helped him.

He said it was “an absolute joy” to be able to “celebrate this moment, not because of me, but because of you all and what we are trying to defend in this great country.”

He was introduced by Senate Minority Leader Mitch McConnell, a Kentucky Republican, who called Thomas a “legal titan.”

“At the risk of sounding greedy,” McConnell said, “we’d like 30 more years.”

Thomas said he was a “little embarrassed” by the attention because he’s a “100% introvert” and he thanked “countless people I did not know” — calling them “angels in a very very dark time.”

“I appreciate the senators who voted for me, all 52 of them,” Thomas said to laughter. “Hey all you need is 50.”

(Thomas was confirmed by a 52-48 vote in 1991 after his nomination was very nearly derailed after sexual harassment allegations by Hill, his former employee at the Department of Education and the Equal Employment Opportunity Commission.)

His remarks came after top appellate lawyers and judges — many of them former clerks — from the highest echelons of the judiciary came together in Washington to fete Thomas — only the second African American to serve on the court — and his legacy.

Panelists at the event discussed his views on the First Amendment, religion and race, as well as his efforts to limit the power of federal agencies and the so-called “administrative state.” They praised his adherence to the judicial philosophy called “originalism” and his strongly held belief that the court is not always bound by past precedent, even if a decision has been on the books for decades.

After the event he headed back to work to deal with a late-night death penalty application that was still pending.

It’s too early for any full opinions this term, but behind the scenes, assignments have begun. Because of his seniority, when Roberts is in dissent and Thomas is in the majority, it is Thomas who will assign the opinion. That fact alone, could shape the Chief Justice’s thinking going forward.

On September 1, a 5-4 vote created a firestorm across the country, by allowing a Texas six-week abortion ban to go into effect pending appeal, nearly nullifying Roe v. Wade in that state. In December, the court will also take up a Mississippi law that bars most abortions after 15 weeks. The state is asking the court to overturn Roe — the landmark decision that has been on the books for nearly 50 years.

Thomas’ vote is not in doubt. In June 2020, for example, he wrote that Roe is “grievously wrong.”

On Thursday, McConnell praised Thomas jurisprudence in the area.

“Take his jurisprudence on unborn life,” McConnell said. “Every time without fail, Justice Thomas writes a separate, concise opinion to cut through the 50-year tangle of made up tests and shifting standards and calmly reminds everybody that the whole house of cards lacks a constitutional foundation,” he said.

The justices will also take on a Second Amendment case, hearing arguments in November.

Back in in 2008 in District of Columbia v. Heller, the court held for the first time that the Second Amendment protects an individual’s right to keep and bear arms at home for self-defense. Except for a follow-up decision two years later, the justices have largely stayed away from the issue — infuriating gun rights advocates and even some of the justices themselves.

In 2017, joined by Justice Neil Gorsuch, Thomas expressed his frustration. “I find it extremely improbable that the Framers understood the Second Amendment to protect little more than carrying a gun from the bedroom to the kitchen,” he wrote.

For years Thomas has urged his colleagues to take up another case, and now they have.

It requires a resident to obtain a license to carry a concealed pistol or revolver and demonstrate that “proper cause” exists for the permit. Residents must show that they have a great need for the license and that they face a “special or unique danger to their life.”

Justices may also take up a case concerning affirmative action, if not this term, maybe next. In 2013, Thomas made his views on that issue clear. A “state’s use of race in higher education admission decisions is categorically prohibited by the Equal Protection Clause,” he said.

Former clerks having a major influence in the judiciary

At the Heritage event, Thomas clerks pointed to Thomas’ pattern, like in the Affirmative Action case, to express his views and hope that they will one day become majority opinions.

Judge Allison Jones Rushing, a Trump nominee to the 4th US Circuit Court of Appeals and a former Thomas clerk, dedicated her discussion to Thomas’ influence.

“He has persuaded his colleagues to come along,” she said, even as recently as last term in a case where a 6-3 court, divided along familiar ideological lines, invalidated a California rule that requires charitable organizations to disclose the names of contributors. The case had been closely watched by supporters of campaign finance reform who believe the ruling could eventually lead more anonymous money to enter the political sphere. Thomas concurred in the decision saying that the “right to assemble” includes the right to “associate anonymously.”

Justice Sonia Sotomayor wrote the main dissent for her liberal colleagues. “That disclosure requirements directly burden associational rights has been the view of Justice Thomas, but it has never been the view of the Court “she said.

It’s no surprise that another former clerk, William Consovoy, is also the lead lawyer behind the affirmative action challenge making its way to the high court concerning Harvard’s admission policies. Consovoy also served as President Donald Trump’s lawyer when he attempted to block a subpoena from New York state prosecutors for his tax returns.

Both Neomi Rao and Gregory Katsas worked in the executive branch, and then they were appointed to serve on a powerful appeals court in Washington, DC.

Jeffrey Wall served as acting solicitor general for the Trump administration and argued in favor of Trump’s controversial travel ban. Another Trump nominee, James Ho, sits on the 5th US Circuit Court of Appeals and voted to allow the Texas six-week abortion ban go into effect. Two high-level sources say that if Trump had had the opportunity to appoint another Supreme Court justice, Ho would have been high on the list.

And Carrie Severino is the president of the Judicial Crisis Network, a group that played a significant role supporting the Trump administration’s nominees.

Thursday night, Thomas thanked them all. “I love my kids,” he said. “These are my kids, they spend a year of their lives with me and they never get away. I love being a part of their lives.”

But as many of his former clerks are moving forward to shape the law, Thomas is still laying the groundwork for issues he hopes one day will garner a majority.

He has called, for instance, for the reconsideration of a landmark First Amendment case, New York Times v. Sullivan, labeling it a policy-driven decision “masquerading as constitutional law.” He’s suggested that Congress weigh whether laws should be updated to better regulate social media platforms.

And in 2019, he explained his thinking about an Indiana abortion law that made it illegal for a doctor to perform an abortion motivated solely by the race, sex, diagnosis of Down syndrome or disability of the fetus. The court said it would leave in place a lower court opinion that had invalidated that provision of the law, following “our ordinary practice” of denying petitions that raise legal issues that have not been considered by other court of appeals.

In a concurring opinion, Thomas agreed with the court’s decision to decline to “take up the issue now.” But he went on to warn his colleagues about the potential for abortion “to become a tool of eugenic manipulation.” He said the court “will soon need to confront the constitutionality of laws like Indiana’s.”

Notably, this April a federal appeals court upheld an Ohio law that prohibits a doctor from performing an abortion when the doctor knows the reason is because of a fetal diagnosis of Down syndrome. The judges did not all agree on the reasoning, but laced within the 111 pages were references to eugenics, and Thomas’ opinion. 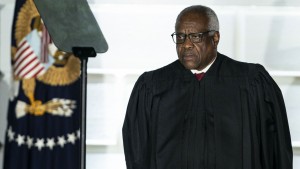