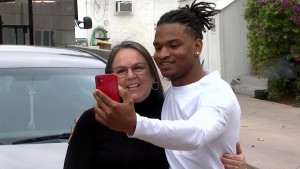 After an accidental Thanksgiving invite in 2016 introduced Jamal Hinton and Wanda Dench, they celebrated yet again.

Thursday marked the sixth year the pair celebrated the holiday together. Hinton shared a photo on Twitter, writing “Thanksgiving 2021.”

The two first met in 2016 when Dench, from Mesa, Az., sent a text inviting Hinton over for dinner. It was meant for her grandson, who had changed his phone number. Instead, Hinton, who was 17 at the time, got the message while sitting in class at Desert Vista High School.

The two figured out the mistake, then sent selfies to each other, with Hinton asking if he could still come over. Dench texted, “Of course you can. That’s what grandmas do … feed everyone.”

Hinton had told his social media followers last week that the two would be celebrating the day together again.

“We are all set for year 6!” he wrote, alongside a picture of a text message from Dench inviting him, his girlfriend Mikaela and his family over. He also included a photo of himself, Dench, Mikaela and Dench’s late husband Lonnie, who died in April 2020 after a battle with Covid-19.

Hinton has documented the holiday each year on his social media. In 2019, he shared a snap, writing, “Blessed to have such wonderful people in our lives.”

After Dench’s husband died, they still spent the holiday together.

“This Thanksgiving, along with all the holidays coming up, aren’t going to be the same as past ones but we will make the best of it,” Hinton wrote in a post last year. “Rest In Peace to Lonnie and everyone else we lost this year we will miss you greatly. Thank you for being in our lives.”

In an interview earlier this week with azfamily.com, Dench and Hinton reflected on their friendship.

“I would have missed out on a wonderful relationship,” Dench said, when asked what would have happened if she hadn’t invited Hinton over years ago. “I’ve changed my view so much on the younger generation, and now that I’ve reflected back on all these years, I didn’t change their life; they changed mine.”