What we need now: The Bob Ross Experience, now open for visitors in Indiana 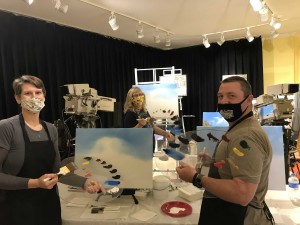 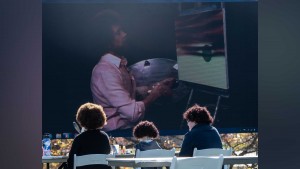 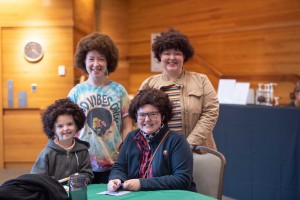 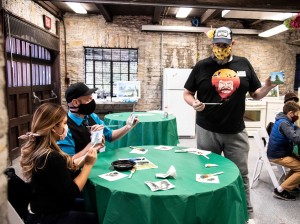 Everyone could use more of those in 2020, and the new Bob Ross Experience in Muncie, Indiana, delivers it with vibrancy, and of course, joy.

Last month a permanent exhibit opened at Minnetrista (a public gathering place with historic buildings located in Muncie), to honor the late Bob Ross and his belief in democratizing artistic expression through painting. The museum is located inside the Lucius L. Ball House, one of many historical buildings on the 40-acre campus. The house used to be the home of Ball, whose younger brothers founded the Ball glass company. The house later was converted to a studio where Ross filmed much of his iconic show, “The Joy of Painting.”

Guests can now walk through the former studio, which has been refurbished as a nearly exact replica of how it was in Ross’s time. Curators for the exhibit worked closely with Ross’ friends to create a hands-on experience with behind-the-scenes stories, Minnetrista Communications Manager Katy Maggart said.

“We didn’t want this to be something that commercialized Bob or made him something he wasn’t,” Maggart said. “Our goal is to honor Bob and to continue to help share his message of creativity and positivity.”

Guests can see rare artifacts, including the original cameras used to film Ross’ famous television show. There are paintings on display that will be rotated every couple of months so guests see new artwork each time they visit.

People flocked to the grand opening weekend on October 31, dressed in their best Bob Ross Halloween costumes. Regardless of the holiday, Maggart said they still would have encouraged fans to dress up.

A Bob Ross experience wouldn’t be complete without palette and paintbrush, so there are also painting workshops hosted on the grounds. Classes will be held twice a month.

In order to teach a Bob Ross painting class, the instructor must become a Certified Ross Instructor, or CRI for short. They complete a an intensive three-week course in New Smyrna Beach, Florida, at Bob Ross Inc. to earn their certification.

Faye Fletcher is a CRI and has been teaching Bob Ross painting classes all around the world for the past 18 years. She was one of the lucky few CRIs to be handpicked to teach classes at the Bob Ross Experience grand opening.

“I’m still pinching myself that they would pick me,” Fletcher said. “I’m incredibly honored and humbled.”

At the kickoff event, Fletcher taught a class of students how to paint “Under Pastel Skies.” In one of the classes, a woman told Fletcher that she came to the class to see if she was worthy of purchasing paint supplies.

“You are worthy, even if you don’t paint well,” Fletcher said. “She did paint well.”

In addition to teaching the group class, Fletcher was also selected to teach a private workshop in the actual studio where Ross filmed his program — a very rare opportunity.

“It was amazing to look a little bit past my easel and see right there where Bob stood, you can kind of hear him laughing,” Fletcher said.

The sold-out grand opening was successful, but it wasn’t without its challenges. Exhibit planners weren’t sure if the event was going to happen due to the coronavirus, but they worked with local health experts to ensure that the event was safe.

Face masks are required and capacity is closely monitored. For the studio exhibit, only 15 people are allowed to enter per hour, using a timed ticket system.

The positivity that Ross brought to his show is something that the world needs even more now, Maggart said. They began planning for the exhibit in 2018 with no idea how much people would need a little Bob Ross this year.

Fletcher also turned to Ross when going through her own dark season in her life. While battling depression in 2001, she gathered up her birthday money and purchased a Bob Ross paint set. And once she started painting , she couldn’t stop.

“I teach Bob Ross paintings because Bob has put paint brushes in the hands of so many people that had never painted before, and I really love being a part of that first step in an artist’s life,” Fletcher said.

Tickets for the exhibit and painting workshops can be found at minnetrista.net.

Wanted: People who want to get paid to taste cheeseburgers

China has 8 million blind people, but only 200 guide dogs

Ghislaine Maxwell is woken up in her cell every 15 minutes by flashlight to see if 'she is breathing,' her lawyer says

Bruce Boynton, the man who inspired the Freedom Rides, dies at 83